Description of YGL138C: Putative protein of unknown function; has no significant sequence similarity to any known protein[1] 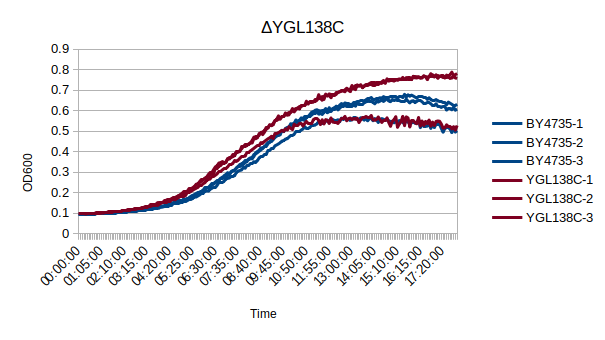 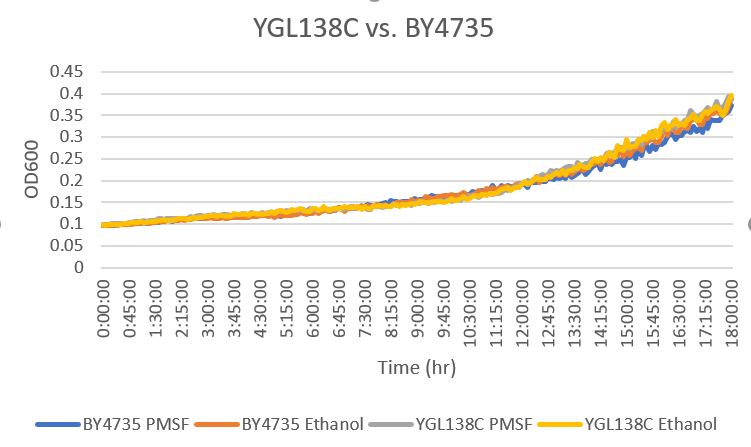 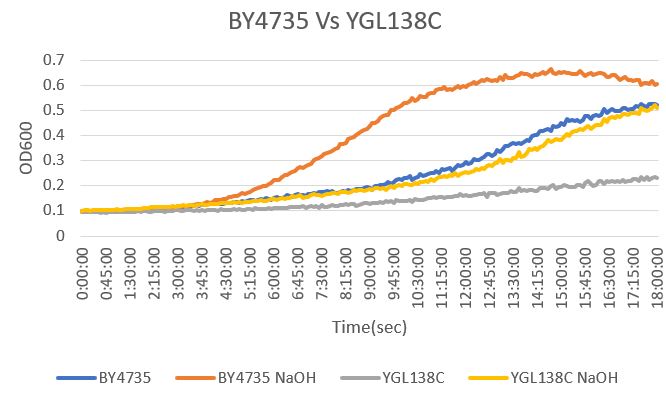 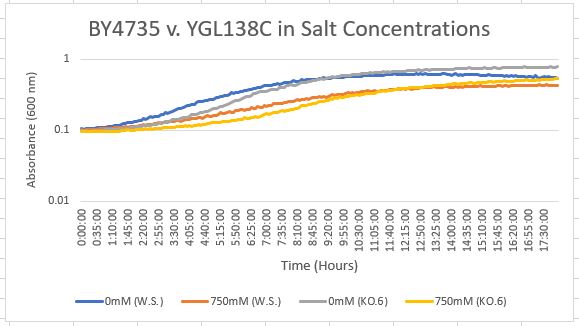 The graph above shows the growth rate for the previously listed strains and the relative level of NaCl concentration. Knocking out the gene positively influenced the growth rate. Comparing the YGL138C doubling times in 0mM and 750mM NaCl, there is a moderate effect on the growth rate. This effect negatively impacts the knockout strain's (YGL138C) growth rate. 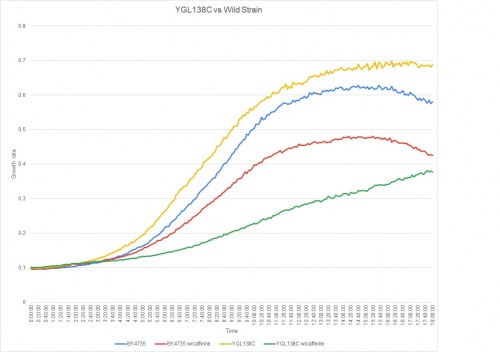 When adding caffeine to the YGL138C strain, the effect it had on the growth rate was significant. The doubling times are as follows:

Doubling time of BY4735 with caffeine: 138 minutes

Doubling time of BY4735 without caffeine: 187 minutes

When adding caffeine to this strain knockout, the growth rate slowed down a great deal. 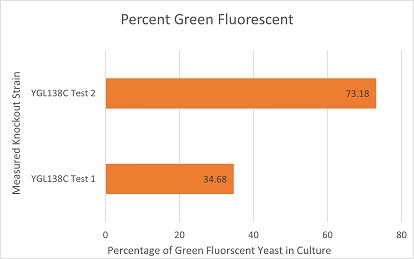 These are the results of a competitive co-culture protocol. The knockout strain was grown in a culture to test fitness against a green, fluorescent wild-type strain. The percentage of analyzed cells in the culture measured was those displaying green fluorescence. In theory, this should mean if a knockout has reduced the fitness of a strain of yeast, the fluorescent wild-type strain would have a higher percentage than the knockout strain. If the knockout does not decrease fitness, they would be roughly equal. This may not be so in results. Sources of error may include contamination and human error.

The results here are not expected in theory. The YGL138C knockout strain had a significant disadvantage and the fluorescent wild-type strain dominated the given result. Test 1 must have been contaminated with a faster growing organism than yeast that did not display a fluorescent behavior like the wild-type fluorescent yeast used. However, Strain 2 appears to follow an expected result and suggests the knockout strain had a significant disadvantage imposed to its fitness, given the wild-type strain outgrew it. 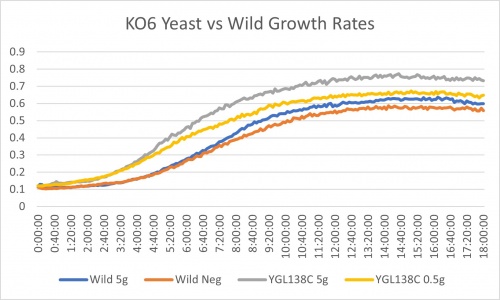 YGL138C gene shows an interesting result. While the wild strain from 5g/ml of ammonium sulfate to none shows a 17.8% slower rate, it shows a 35.5% slower rate. For further analysis 0.5g/ml to no ammonium sulfate was compared too. Wild showed 1% slower rate and YGL138C showed 38% slowed rate. Based on the differences of these two treatments in the wild to the YGL138C KO strain it could be said that there was experimental error. The differences in percent are 16.8% in the wild and roughly 3% in the KO strain. The doubling time of the negative control is like the wild as well. It could be that errors in volume transfers occurred causing increased growth in the other treatments. It could also be that this strain with the knocked out YGL138C gene is in fact more sensitive to nitrogen starvation. 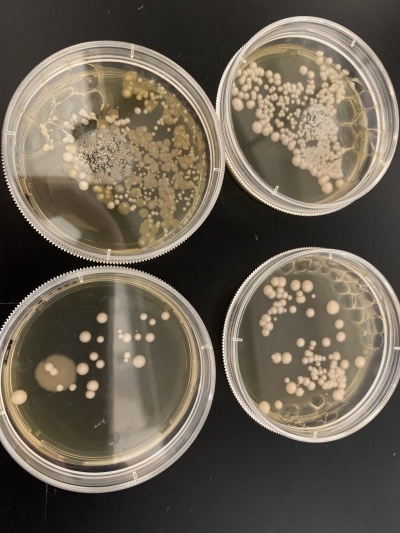 Interpretation: The two 0sec plates are on top and the 600sec plates are on the bottom. The 0sec yeast plate from experiment 2 had a lot of contamination along with the yeast while the 600sec plate from experiment 2 had very little. This yeast strain was about 80% for both plates which is more significant than some of the other strains however I'm not sure I'd say this is significant. It's possible that the number of yeast colonies was miscounted on the 0sec experiment 2 plate because of how small many of colonies are and how much contamination there is. Though it may be possible the gene played a role in UV resistance, it's hard to say with only one run of the experiment being good. 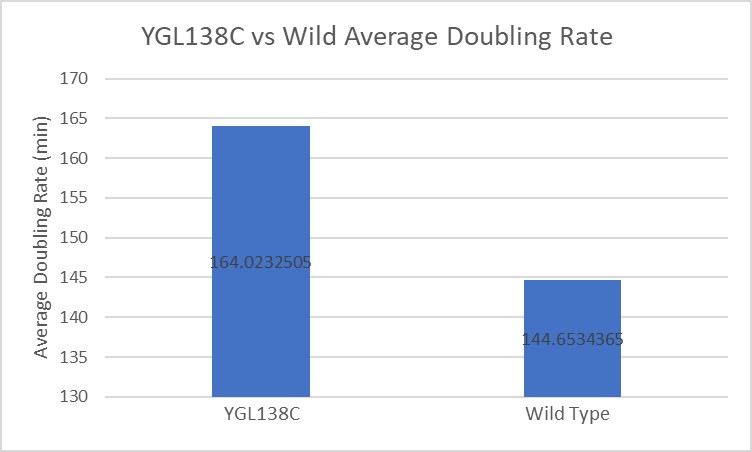 From this data we can determine that there was moderate growth inhibition on this strain of yeast. The modified yeast had a doubling rate that was about twenty minutes slower than the wild type on average, and when compared to the effect on other yeast strains this is a moderate effect on the inhibition of growth. 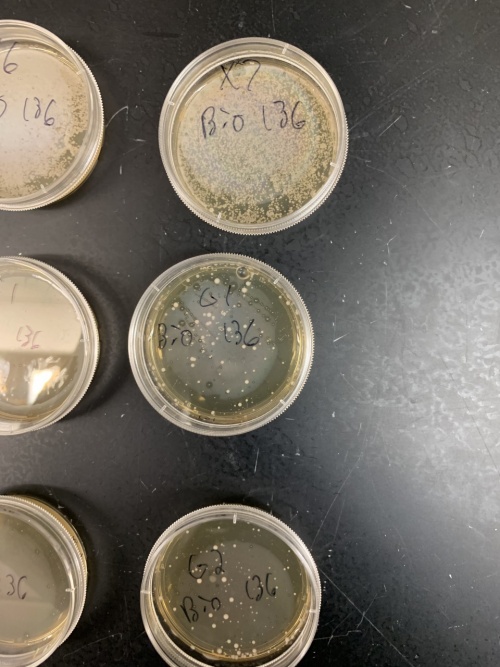 The yeast strain YGL138C was impacted significantly by the heat shocking of the thermal cycler. As seen in the image, the controlled plate grew a lot of small DNA colonies all throughout the majority of pitri dish. It looks like a very thick sheet of cells. When compared to the two trial heat shocking plates, there are a lot less cells being grown. The trial cells are slightly larger than those of the controlled, but not by much. The quantity of the cells is much smaller, and the quality (size) of the cells is not that much bigger than what they're being compared to. This gene was heat sensitive, but not as much as the YLR426W yeast strain. 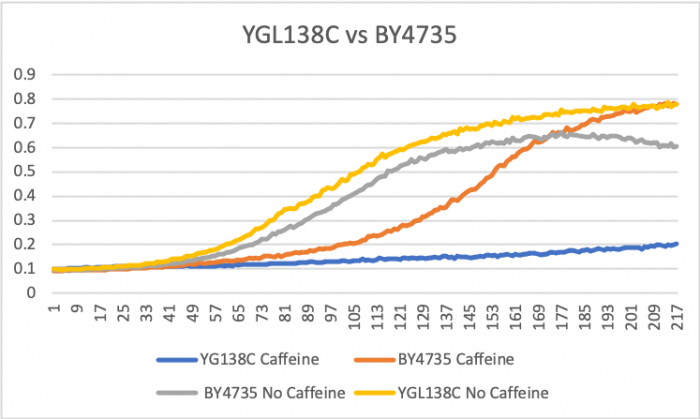 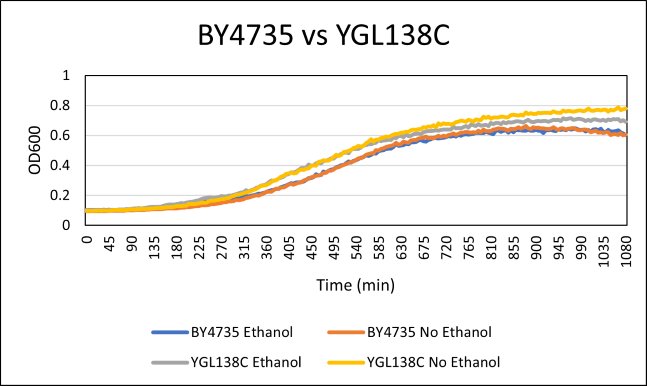