Description of YBR225W: Putative protein of unknown function; non-essential gene identified in a screen for mutants affected in mannosylphophorylation of cell wall components[1][2] 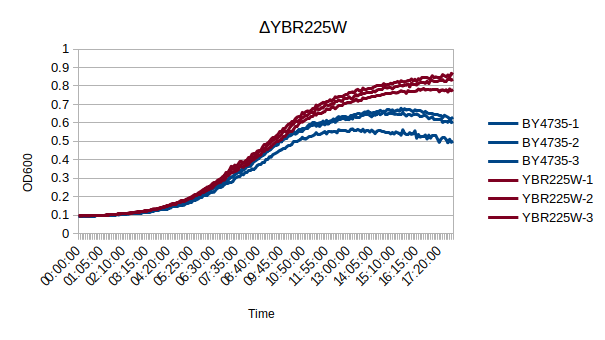 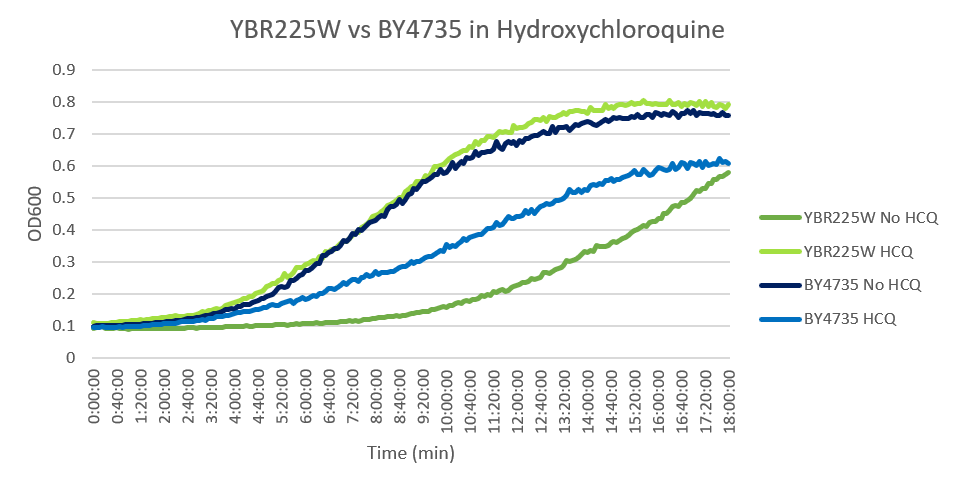 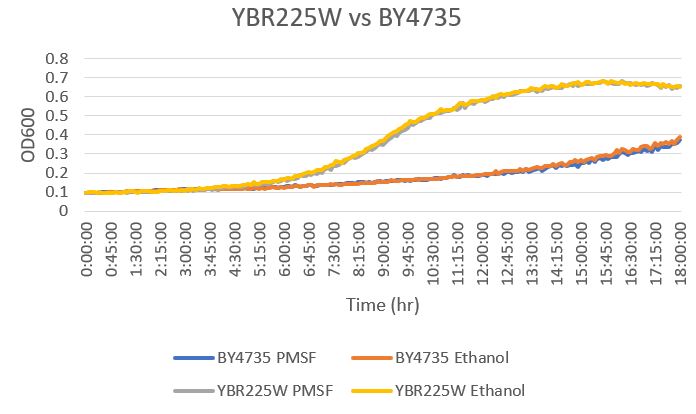 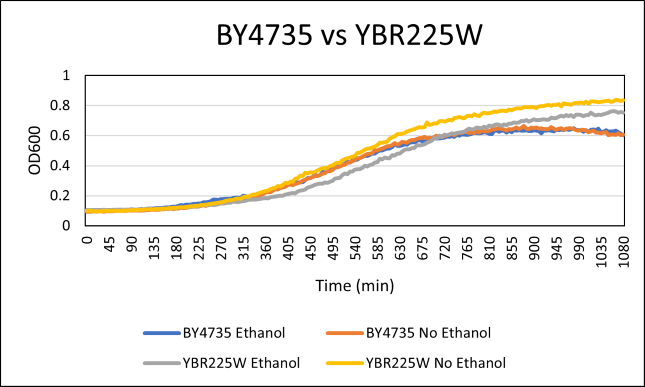 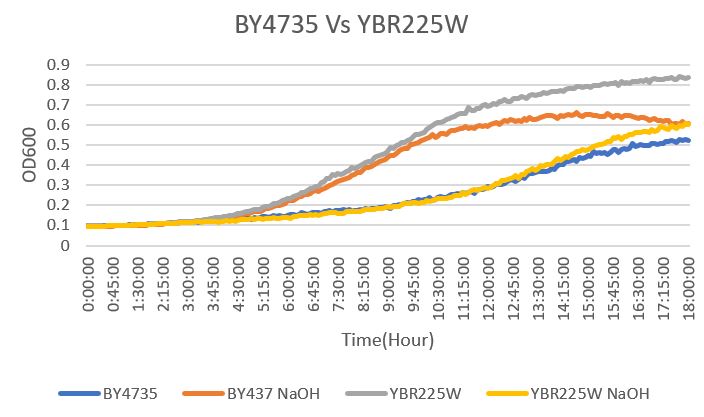 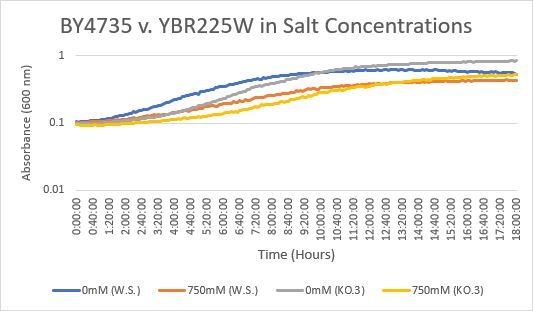 The graph above shows the growth rate for the previously listed strains and the relative level of NaCl concentration. Knocking out the gene negatively impacted the growth rate. Comparing the YBR225W doubling times in 0mM and 750mM NaCl, there is a no effect on the growth rate. This effect has no influence on the knockout strain's (YBR225W) growth. 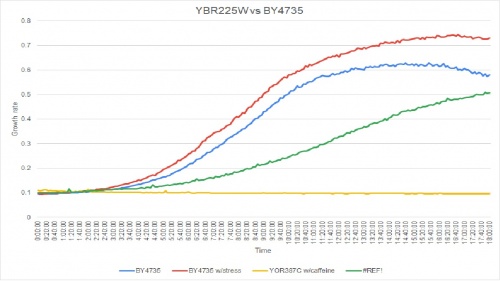 When adding caffeine to the YBR225W strain the growth rate had a huge effect. The doubling time of the strains were as followed:

Doubling time of BY4735 with caffeine: 138 minutes

Doubling time of BY4735 without caffeine: 187 minutes

The effect that the caffeine had on the YBR225W knockout strain increased the doubling time. The effect was detrimental to the yeast and it didn't grow. 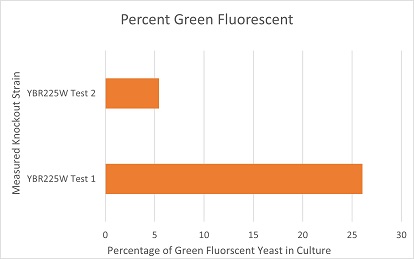 These are the results of a competitive co-culture protocol. The knockout strain was grown in a culture to test fitness against a green, fluorescent wild-type strain. The percentage of analyzed cells in the culture measured was those displaying green fluorescence. In theory, this should mean if a knockout has reduced the fitness of a strain of yeast, the fluorescent wild-type strain would have a higher percentage than the knockout strain. If the knockout does not decrease fitness, they would be roughly equal. This may not be so in results. Sources of error may include contamination and human error.

The results here are not expected. It was not readily apparent this knockout strain grew quickly, so more likely than not, both tests were contaminated with an organism that grows faster than yeast and does not display a fluorescent trait like the wild-type. 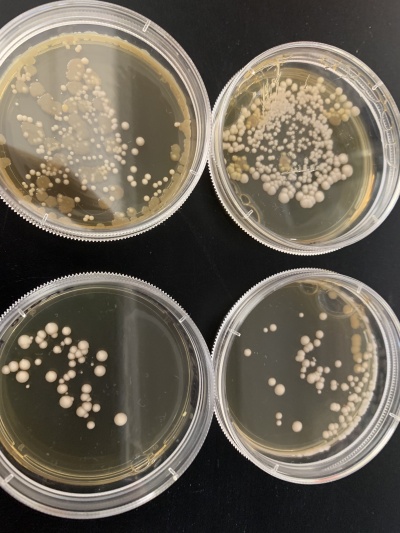 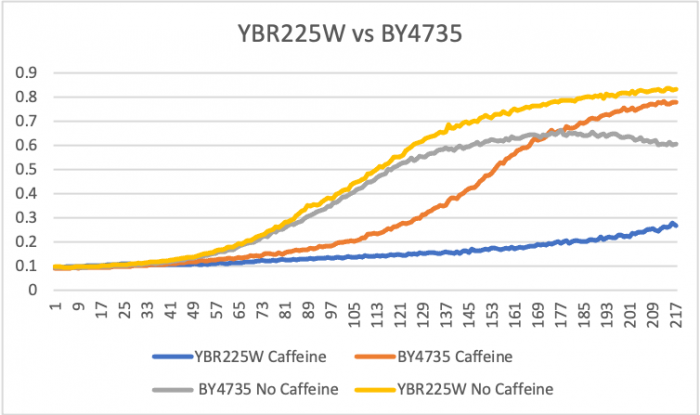 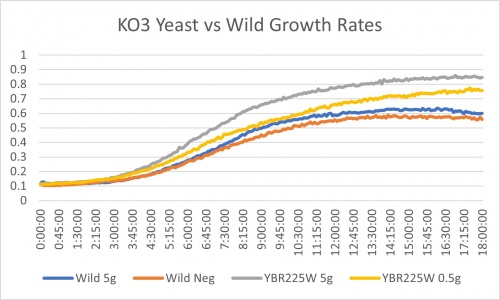 YBR225W gene does not indicate any difference from the wild strain when starving of nitrogen. We know this because in the wild it shows 17.8% slower growth when completely removing ammonium sulfate from the media and comparing that to the full amount of 5g/ml. While in YBR225W it shows 18.1%. These are more or less the same indicating that this gene does not make the yeast more or less sensitive to nitrogen starvation. 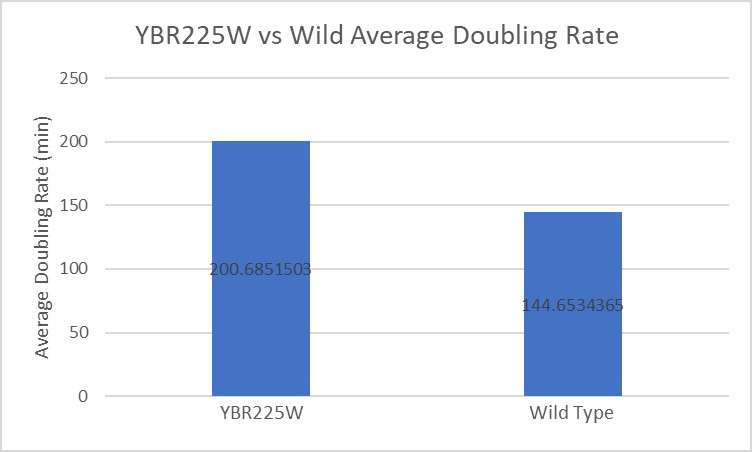 From this data we can determine that there was significant growth inhibition on this strain of yeast. The modified yeast had a doubling rate that was fifty-six minutes slower than the wild type on average, and when compared to the effect on other yeast strains this is a large change in the average doubling rate. 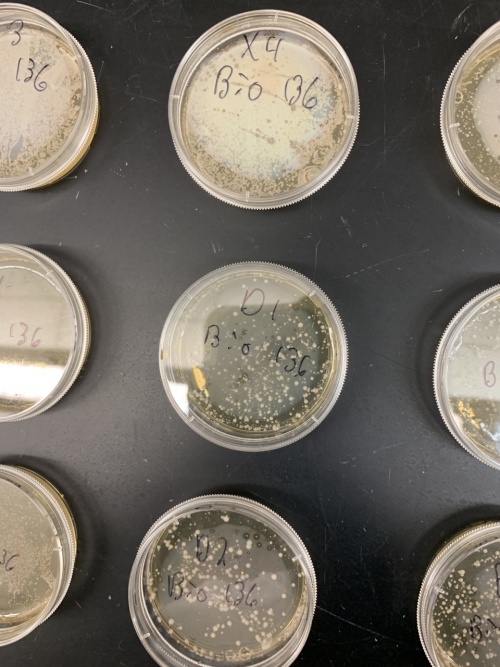 The YBR225W yeast gene was effected by the heat shock experiment. It was difficult to get exact data being that there were many colonies to count in each plate, but it is easy to see that there were significantly less colonies on this genes heat shock plate compared to the non-heat shock plate. This gene's DNA colonies were much larger than the controlled plate's, but had fewer colonies at the same time.