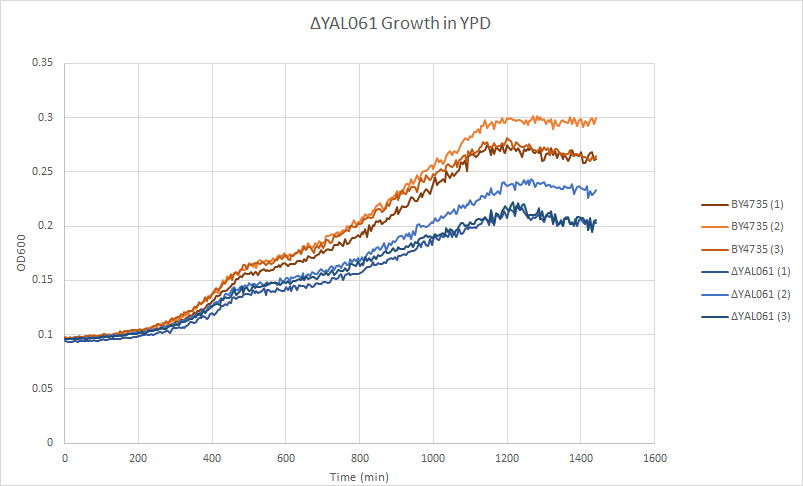 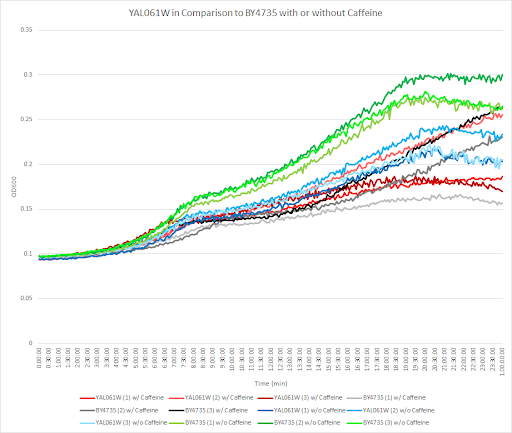 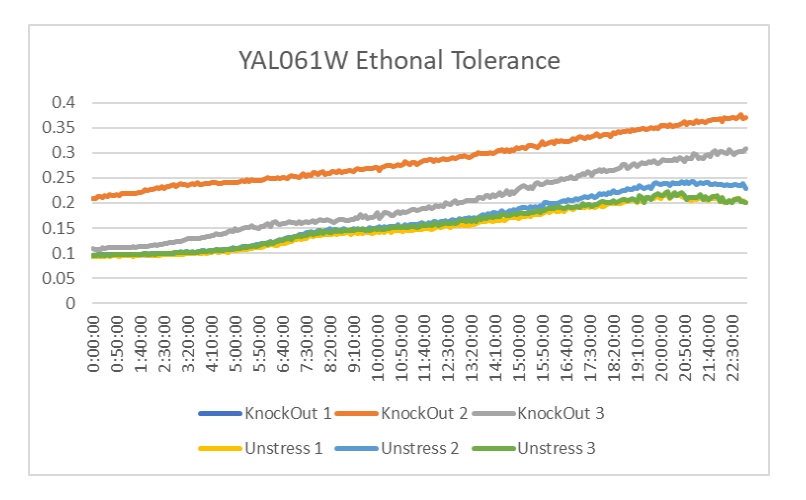 This graph shows the growth curve of ethanol tolerance in YAL061. The unstressed lines represent YAL061 that was not treated with ethanol. If you examine the graph you will notice that the strands that were treated with ethanol grew more than the ones that weren't. The average doubling time for the stressed yeast was 1263.28 minutes. The average doubling time for the unstressed yeast was 1174.42 minutes. The results show that YAL061 in ethanol leads to an increase in growth. 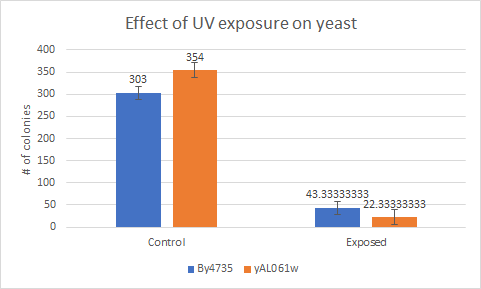 This bar graph shows us that compared to a BY4735 background, Knocking out yAL061w makes yeast more sensitive to UV light. The protocol can be found at 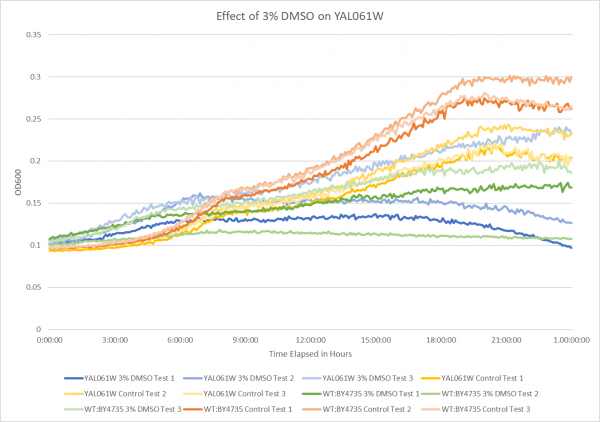 Effect of Cycloheximide on YAL0061W 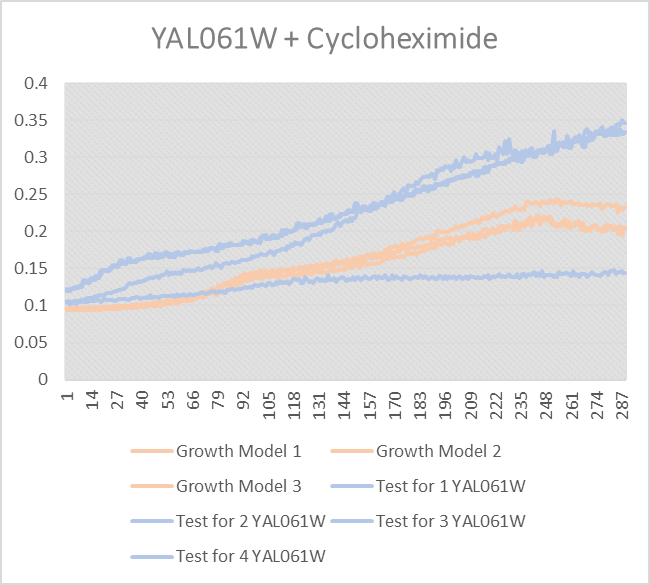 This was Cycloheximide with the first KO Gene. The Growth Models 1-3 are the KO not being distressed. Tests 1-4 were our results. Most of the yeast survived or even did better,except for test 1, which is weird. And we are unsure why. 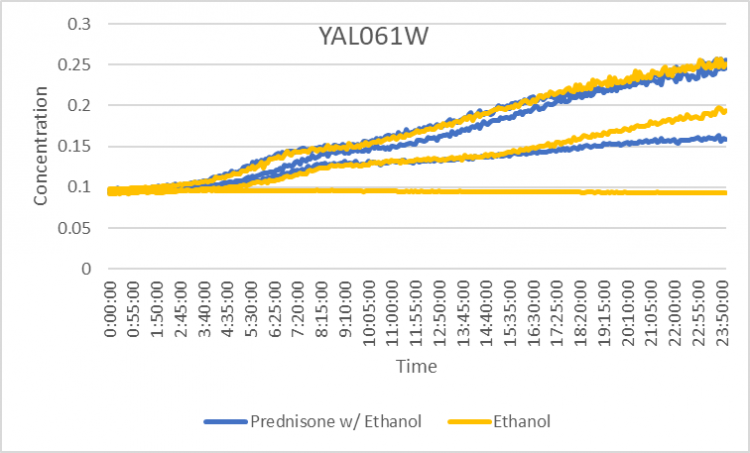 The graph above shows how dilutions P2 (30 µg/ml) and E2 (10% ethanol solution) impacted the growth rate of the knockout yeast strain YAL061W over 24 hours. The concentration did not double for P2 or E2 during test 3 for this experiment. Taking only the first two test results for each, the doubling rate averages to around 1182.5 minutes for ethanol only. As for the Prednisone with ethanol, the doubling rate averages to around 962.5 minutes. Overall, ethanol decreased the rate of growth by almost 220 minutes. These results conclude that Prednisone promotes the growth of yeast cells without the YAL061W gene. 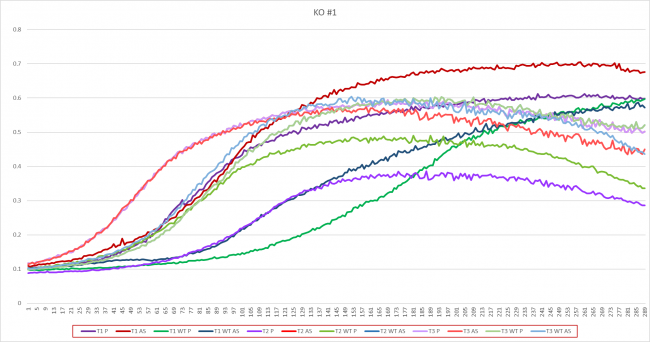 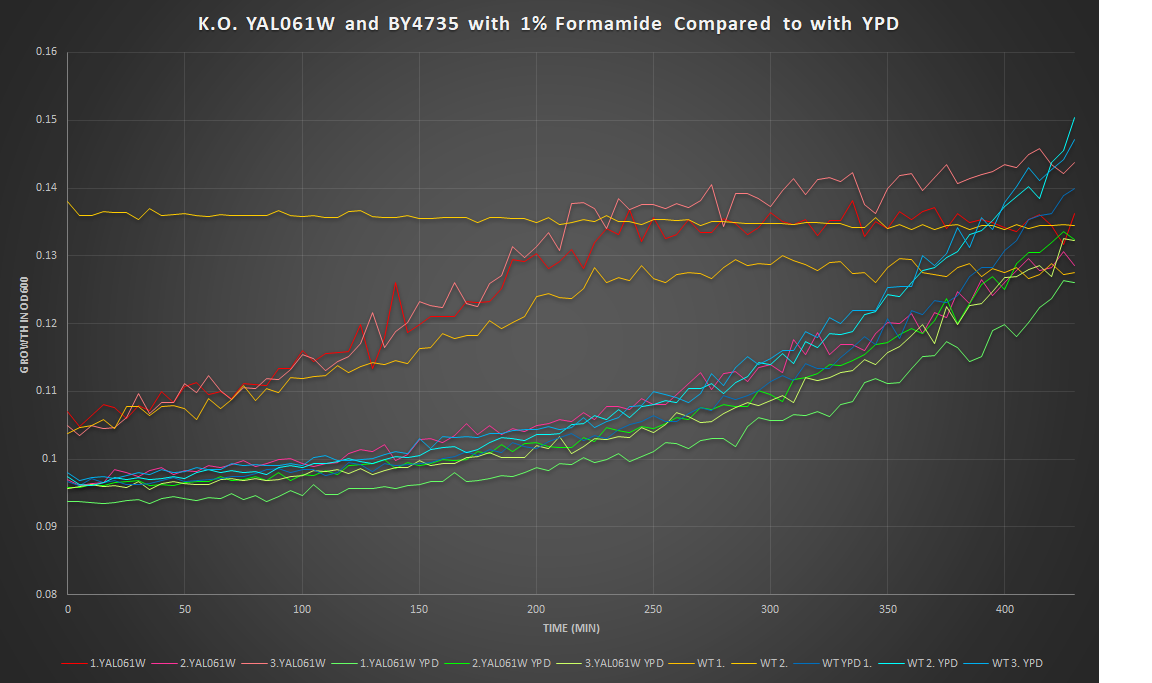 This graph shows the growth curve of the knockout yeast strain YAL061W and wild type BY4735 in 1% formamide in 3 trials. The average calculated doubling time for YAL061W with 1% formamide was 5,177.34 minutes, while the unstressed strain was 2,371.77 minutes. This concluded that the stressed out strain is highly sensitive to 1% formamide, and grows as a slower pace in this environment. Our stressed wild types doubling time was 3,178.81 minutes, and the unstressed was 5,887.54 minutes. The stressed wild type in this experiment proved to show better growth concluding that the addition of 1% formamide for this strain does not cause sensitivity.

Zone of Inhibition of 30% Hydrogen Peroxide on YAL061W 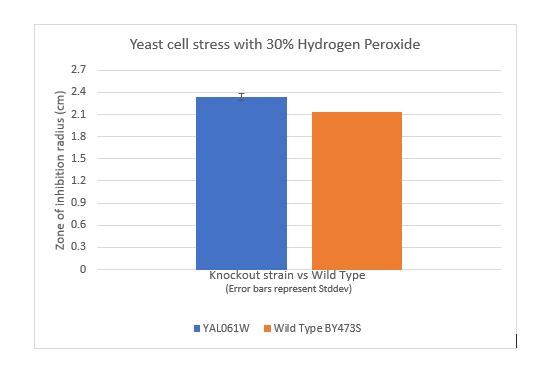